The nerf that closed helms present to perception is far too much for something that does not plug your ears and generally has enough gaps to allow casual conversation in. The holes on the front below the eye slits are intentional for ventilation and would allow sound waves in frontally. The shape allows an under-helm gap between the gorget and the helm itself, which would filter in sounds. Yes, it would muffle them, but padding was not always hood form as a chain coif was not always worn underneath (especially for those who could not afford to outfit their new knights in standard coverings right off the bat. Medieval armor is most definitely not one-size fits all even with proper fitting). Hoods should not offer a perception nerf, or it should be minimal, as well, because hoods are open-faced and can catch sound waves with ease, as well as allowing full frontal sight and still a lot of your peripheral vision when staring directly forward, just not all of it.

The below is a greathelm. More specifically, a German flat top one. Not all helms are alike, yes, but that furthers my point. You shouldn't be at an immediate and almost impossible to defeat disadvantage for wearing a closed-face helm against people attempting to sneak up on you, especially if you've been trained to notice them and/or they're not skilled at all. This falls into the "Yeah, I lost my eye, but I trained to compensate for it" league of debates. 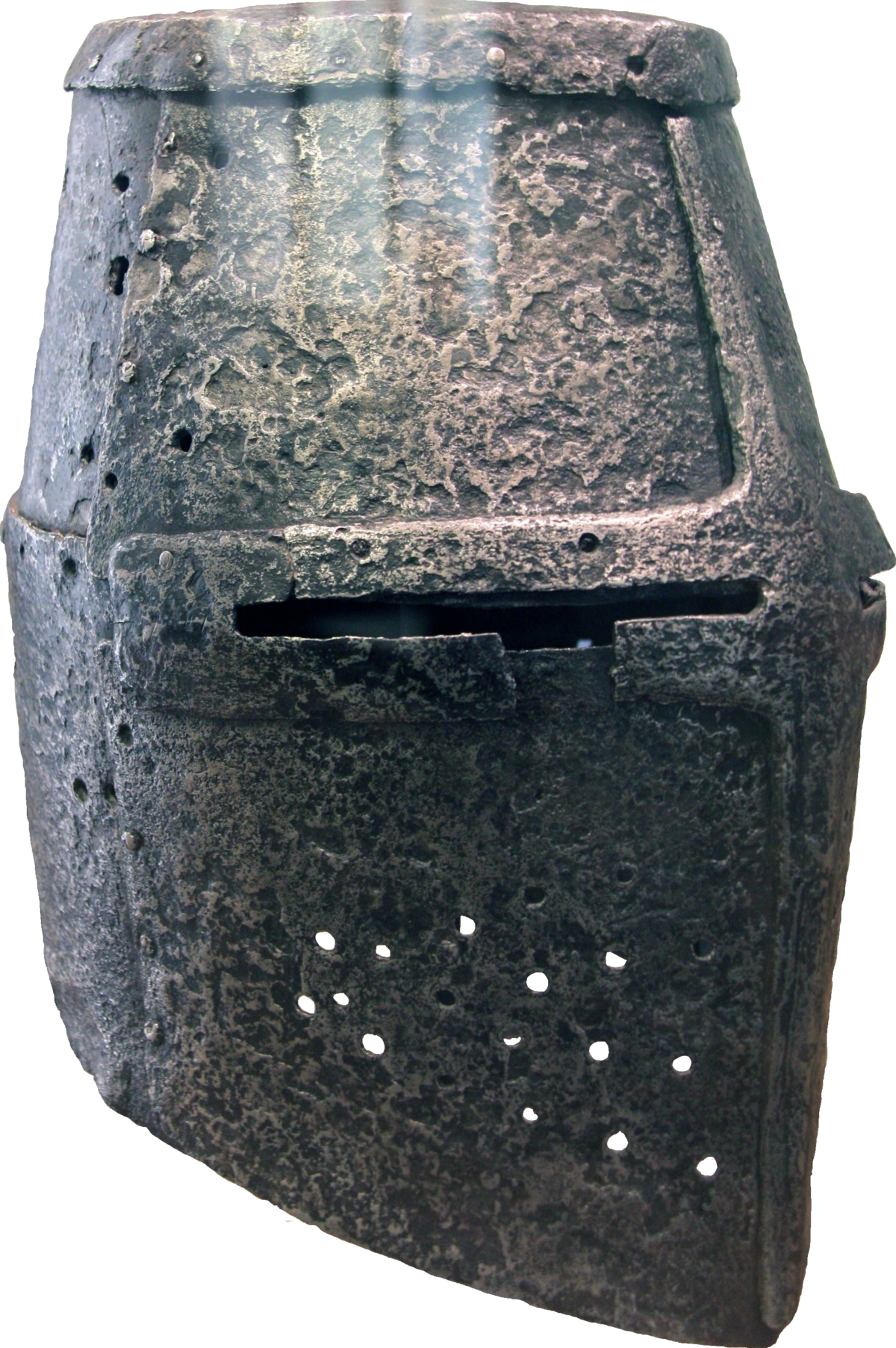 Otherwise, I can say this much... Stealth is already mechanically powerful enough, especially if you're meant to use it regularly or just train it. Balance-wise, I could see the highest perception nerf being -50% for full-head helms, -10% for hoods and variable for masks based on mask type, from -10% to -25%.
Top

I do tend to agree. Greathelms shouldn't reduce your perception by a gross 99%, it's just completely nonsensical. Even with my eyes covered and ears muffled, I am still at least somewhat aware of my surroundings and not completely crippled by the fact. It certainly isn't easy peasy, but I can at least function with my senses dulled. A greathelm does neither of these, you should be able to function much better in one as your senses aren't canceled out in the slightest- dulled, sure, but you're not blindfolded and wearing earmuffs. I really don't see why they reduce perception by the intense amount that they do.

This is coming from somebody who hates the idea of eye protection being 'nigh-impervious'. That's a really dumb concept.

Also why do hoods impact you mechanically at all in terms of perception? There is no disguise mechanic in the game, people don't pay attention to whether or not you're wearin a hood to cover your eyes. This doubles for masks that cover your face. If it provides you no mechanical benefit, why is it giving you a mechanical downside? It's purely as aesthetic choice and I don't feel like it should impact you in the manner it does.

Dakhal wrote:Post Script: Eyepatches do not offer any mechanical downside. Absolutely zero perception loss, despite the fact that you've lost half of your vision.

This is truth. Eyepatches are powerful objects indeed. Far more powerful than any greathelm, certainly, for they offer naught in the way of nerf!
Top

I can agree with the op here.
Top

Funny enough, I used to argue this very problem with another GM back in the day. I don't personally agree with the decision but I still respect their view on the subject.

One thing I always like to remind folks about is that just about anything can be justified using real life as an example. Oddly enough most of the time these examples are used to ask for buffs. What if I were to say that the weight of the helm causes neck strain and implemented a negative mechanic to fatigue? Or what if I said that the hot sun causes the helm to burn your skin and causes head damage? Don't worry, I jest. hehe

Anyways, when I look at these kind of problems I like to look at them through the lens of the what I like to call, "The CLOK Trinity" i.e. realism, gameplay and original intent.

From a realism standpoint, I can understand how many ancient helms could be used to effectively see and hear thru even though they would have been a bit more impaired than normal. A 90% decrease does sound like a bit much.

From a gameplay standpoint, I can see that helms should have perception hampered in some way because of realism but the actual number does not need to reflect perfect real world examples. The number is a bit exaggerated from real life but that is to help balance the stealth vs armored character vs character problems we have had in the past. Stealth players argued that there moves were useless when used against plate armor (and some ragequit).

The original intent was to act as a balance to give a weakness to armored characters so that both combat types would have ups and downs when they challenged each other.

Now, with all that said. I could see lessening the debuff a bit and maybe have that tie into ones armor skill such that the more armor skill you have, the more you are used to sensing your surroundings while in armor but I think even that would be capped at some point. So you can't keep earning armor skill to negate it beyond a point where we want it to be.
It's not easy being evil...
Top

Was about to post a poorly worded "game versus realism" reply here, and Noctere beat me to it with a much better worded post.

He and I can talk about it a bit and maybe come to a compromise. I want full plate to maintain severe penalty to perception, not based on any realistic representation of armor, but because of game balance. However, is it too severe? Probably.
[GMCHAT Uyoku]: Octum is when the octumbunny comes around and lays pumpkins everywhere right?
[GMCHAT Rias]: Dimmes says "oh hai :) u need healz? ill get u dont worry thaum lasers pew pew pew lol"
[CHAT - GameMaster Rias would totally nuke Rooks]: Here's how elemancy works: The freeblegreeble and the zippoflasm have to be combined with the correct ration of himbleplimp, then you add the gargenheimer and adjust the froopulon for the pattern you want, apply some tarratarrtarr, yibble the wantaban, and let 'er rip!
Top

I wouldn't mind it being tied into armor use, honestly, even if it capped at a specific reduction amount. Armor use is easy enough to train due to it being gained by doing pretty much anything in armor combat-wise, even dodging and taking hits, I believe. Granted, you do need several hundred of it to properly use even light leather and over a thousand to be considered decently trained for plate.

It just doesn't need to be this huge of a nerf.
Top

Yeah that makes sense, armor training means you're trained not only to move more nimbly while using it, but also trains your senses so you're not overly handicapped in it.
Top

Done. All players can now enjoy a perception penalty that has been lessened by 5% when wearing an eye or ear covering item. Additionally, players with over 1000 armor skill can earn even lower penalties as their armor skill increases. FYI this caps at 2500 armor skill and any changes to this effect will not take affect until the head item is removed and re-worn. So if you have the same head item on even now, go ahead and remove it and re-wear to enjoy the 5% increase. Also if you gain a ton of armor skill, you might want to do that again sometime in the future.
It's not easy being evil...
Top

Yes it will. Realistically, wearing a metal bucket over your head and wearing a draped shadowy hood both have similar problems. Granted the penalty is less for things like hoods but knowing how to use armor and how to function in them will also help you there.
It's not easy being evil...
Top

Very interesting. Thanks for the quick feedback, Noccy!

In post script, I actually have or at least had a hood somewhere that was comparable to a greathelm. It covered both eyes and ears and was like a 90% decrease.
Love me or hate me, both are in my favor. If you love me, I'll always be in your heart. If you hate me, I'll always be in your mind.
I lead a Life of Sin.
Top
Post Reply
12 posts • Page 1 of 1

Return to “Feature Requests and Suggestions”